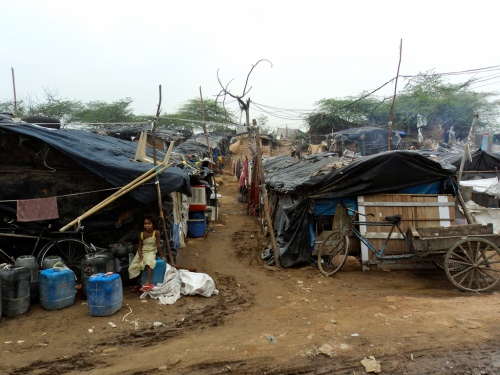 ARRIVING AT DEHLI airport late at night should be rather convenient, since you can avoid most of the desperate shouting and the sweaty unsynchronised crowds. At least that’s what I thought. After the usual control points I quickly retrieved my luggage, changed some money and – half asleep – headed to the exit. But my glasses were far too deep in my handbag and the sliding doors were moving too quickly for me to be able to distinguish the nervous shapes patiently waiting behind it on time. Gradually the noises came to match hundreds of faces surrounding the gates holding signs, one larger than the other, shouting ‘welcome’ and hasty offers for hotel rooms and cab fares to the city centre. 1200 rupees for a ride quickly became 600 and in a few minutes I was on my way to Connaught Place, the city’s main economic hub.

Once there, the crowd of people in front of the airport seemed ridiculously small. I have to admit that choosing one of Delhi’s most popular tourist neighbourhoods was not the smartest thing to do. Just imagine a bunch of twisted streets and improvised passages invaded by persistent merchants, intense smells and – most unforgettably – car horns; I assure you that in a city with one of the highest road densities on earth, car horns can most certainly drive you mad. Between spicy colours and investigative looks, my first day in Delhi abruptly awakened my senses.

But not always in a good way. Finding yourself in front of such a disproportionate presence of waste definitely makes you appreciate the existence of garbage collectors. Here, it seems mostly the cows and monkeys who take care of trash. Walking in the heat for half an hour with the sole purpose of finding a garbage bin is something I remember doing quite often, only to discover upon finding one that it had been overflowing for a week.

I later found out that in Delhi alone there are 9,200 tonnes of garbage being produced every day while just 15 per cent of the city has a door to door trash pick-up system. People are also bitterly opposed to new landfills coming up in their neighbourhood as they have seen that the authorities have turned the past ones into massive, polluting heaps resulting in highly contaminated soil and air. Although it’s a situation I was expecting to encounter when arriving in Delhi – it is considered the most polluted city in the world – I couldn’t help being very surprised by how carelessly people seemed to throw their trash on the streets. Once I even tried to argue about it when a shopkeeper shoved my empty water bottle in a bush. His only response was an apologetic smile. After insisting for about two or three minutes I gave up. After all, how can words really change such deeply carved mentalities? And what can mentality change in the first place, if the policies required aren’t there?

Blaming the poor
Committed to its mission to transform Delhi into a modern global capital, the government has initiated several programs to

improve its environmental quality. Despite attempts to turn trash into electricity and to introduce biomining, the government has often been accused of using pollution as an excuse to implement violent privatisations and unconstitutional land grabs. One of its most criticised measures are the large-scale demolitions of jhuggis (slum houses) and the eviction of thousands of families every year. Considered as encroachers, the 32 million slum residents have been accused of “polluting” the Yamuna river through the discharge of untreated sewage.
Yet, recently published studies reveal that only a tiny fraction of the 3,600 million litres waste-water generated in Delhi each day derives from those living on Yamuna’s banks. It is the 19 sewage drains that come from the posh residential areas and industries that actually pollute the river. According to the studies, one slum dweller often receives only 16 litres per day in comparison with 450 litres received per person in wealthier areas. The poor don’t pollute to the degree claimed, simply because they don’t have the resources to do so.
“The government is presenting incorrect facts in the courts and the poor don’t have the money to approach them and present their side of the story. The fees of the lawyers and judges run in lakhs. How can we pay this?”, a slum dweller told reporters in 2011, after his house had been demolished without any notice or court orders for eviction. “My husband died on the 20th, the day of the eviction. In the morning he asked me to make him a cup of tea. When I gave him the tea, he said we should get the packing done because the bulldozers and police were on the way. As we were putting on things together he said he wanted some water. I got it and in just that moment he passed away. The police put his body on the road and ordered for our home to be demolished”, another woman told the reporters.

These evictions have been presented as a “voluntary relocation”, with people shifting to plots they got elsewhere. But in reality only a small percentage of the residents receive alternative plots. The ‘lucky’ ones who get to move to relocation sites are squeezed in spaces of 16 square metres and often left without electricity, water or toilets. What’s more, the sites are so far away from people’s workplaces – mostly as rickshaw pullers, waste-pickers, hawkers, sweepers, domestic workers, drivers or construction workers – that they can’t afford the bus fare and are forced to quit. Resistance to the evictions are usually punished with beatings or even the use of tear gas.

The absence of planned housing for the city’s poor should not be regarded as coincidental. The fact that inaccurate perspectives of pollution have class consequences has already been proven several times. Thousands of small industrial units have been shut down on the grounds of pollution since the late 1980s, when India was shoved into neo-liberalism.

Neo-liberalism came with a balance of payment crisis that India underwent in 1990-1991. The country managed to prevent payment default by borrowing from the IMF, the World Bank and bilateral donors. However, the loans came with conditions: India had to implement structural adjustments and move away from a state-led development, under the rhetoric of prescription and post-disaster therapy – “shock doctrine” as Naomi Klein calls it. Failure to comply meant that no loans would be provided in the future.

Adhering to Britain and US backed policies took more than higher gas prices. It meant the decline of capital formation in the public sector, the intervention of big business houses in the decision-making process and the re-creation of space to facilitate privatised profiteering. But neo-liberal transformation is not simply a top-down process. It has the support of people interested in non-agricultural sectors and the Indian elite, who are in a position to usurp the advantages out of international technological collaborations, profits and expansion of employment opportunities in the corporate sector. Therefore, even if the public sector continues to provide jobs to scheduled castes and scheduled tribes, disadvantaged people recognised by the government and jobs in the private sector – especially the corporate sector – are monopolised by the upper caste population.

Slums for tourists
The failure of “liberalisation” to establish an egalitarian social order is no secret. The violent industrialisation and the tremendous shifts in economic power between regions, urban/rural, has caused tens of thousands of farm suicides in rural population since the mid ‘90s. According to the National Crime Records Bureau, 199,132 farmers have killed themselves since 1997, a figure that remains disputed; some say that the real number is much higher. As the BBC reports, since 2006 the government spends less than 0.2 per cent of GDP on agriculture leading to huge migratory waves towards Delhi, which is why the number of jhuggi dwellers has grown so sharply. Sandwiched between blue-glass fronted offices and spanking new malls, jhuggis are accused of disfiguring the city as well as spreading crime and disease. Instead of improving their abysmal living conditions, they are violently wiped from the city’s urban planning, unfit to qualify for the vision of “shining metropolises”.

While roaming around Delhi on my fourth day, I found myself in front of one such slum. I was surprised to see a group of tourists following some improvised passages and carefully listening to the tour guide in front. When I approached them and asked what they were doing there, they told me that it was an organised tour priced at 200 rupees a ticket. “It is meant to sensitise and create awareness”, the tour guide told me. “I have been through this myself so I know what happens here”. I didn’t know what to say. I watched them walk away as their cameras bumped on their chests, ready to be used as soon as the catchy image of a slum kid would show up.