The Right to Be Patriotic in Germany 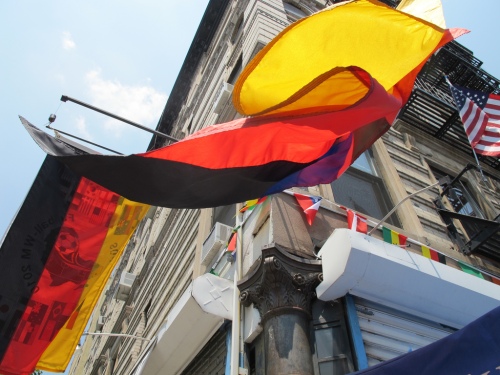 It is the last Saturday in August in Neuss, an average mid-size town in western Germany. At noon precisely one can hear three gun salutes, which mark the beginning of the largest marksmen’s festival in the world that is organized by a single association, the Neusser Bürger-Schützenverein. This festival includes parades in the streets with marching bands, a big funfair, several balls to go dancing, shooting competitions, a King to lead the regiment consisting of about 7000 marksmen in distinct uniforms. More than a million visitors are attracted to this event being the highlight of the year in this city called Neuss. It is the time of the year when all native-born Neussers come back to their roots and celebrate their hometown with the current citizens.

Wait! This is Germany: Men in uniforms marching in the streets, proudly presenting their guns, canons and sabres? Playing the national anthem and hoisting the German flag on the marketplace? Pictures of Germany`s historic low, World War II, pop up in one’s mind triggering the image of a militaristic and ultra-nationalist country.

Statista, a leading German statistics-portal, conducted a survey in 2009 where 83% of the respondents said they were proud to be German. However, this number does not reflect reality. It is not forbidden, but very unlikely to hear a German openly saying to be patriotic, especially in an international environment. This is not because Germans constantly face discrimination, but because there is a deep fear based in this country’s history of falling back into the stereotypical reputation of a Nazi.

This fear is learned from kindergarten onwards. Children never see the German flag hoisted up in their front garden or know the lyrics of the national anthem. Christian Wulff, the former Federal President, took his 17-year old daughter to Israel in 2010 to show that Germany will make sure the Holocaust will not be forgotten by younger generations and reminded everyone of the everlasting collective guilt, which every newborn German will be burdened with. Therefore it is no surprise that it is not part of their individual identity to say: “I am German”.

But everyone can relate to the feeling of wanting to belong somewhere and maybe even being proud of where one comes from. This might be the reason why local patriotism is actively lived in Germany. It is not put into opposition to national patriotism, rather it serves as a substitute. By definition local patriotism is the love towards a region or town and to be distinguished from patriotism and nationalism. But to Germans it is more: There is no bad conscience or need to explain when proudly saying “I`m a Neusser!”. Local patriotism finds expression in showing attachment to local culture and traditions such as a marksmen’s festival. There is this inner feeling of pride whilst being a member of this distinct social community. Germans practice this on a lower level than other countries, which openly show national pride. Take the national days for example, Independence Day in the USA and La Fête Nationale in France, which are major events with festivities, parades and fireworks. In Germany however it is a quiet day, a humble reminder of the reunification of Eastern and Western Germany in 1990.

But there has been a change in the recent years in Germany. One can actually pinpoint it to the Football World Cup, which took place in Germany in 2006. The overwhelming feeling of national companionship surprised everyone. Suddenly it was accepted to show national pride in public by wearing the German football shirts, painting ones face in the national colours black, red and gold, and attaching little flags onto ones car. Dr. Christian Peters from the Haus der Geschichte der Bundesrepublik Deutschland Foundation, tries to explain this phenomenon by saying that a change among generations took place: “It was mainly young people who were seen in the streets watching football and supporting Germany by waving flags. They are free from prejudices and never experienced hostility because being German”. It is the young generation now teaching the older generations. As long as it never reaches any extreme or discriminating areas, Germans also have the right to be proud of their country. It has experienced a major change in the last 60 years, now being one of the most democratic cultures, granting personal freedoms and being a respected member of the world community.

This entry was posted in Anne Odendahl and tagged German Nationalism, Neuss. Bookmark the permalink.