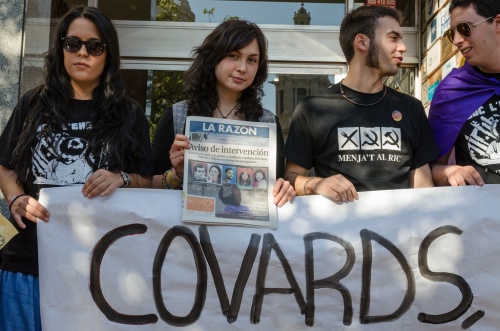 The new law for improving the quality of education proposed by the current education minister Ignacio Wert seems to contradict its own name. Among other measures, the new law contains a number of decisions which have already been implemented; a marked increase in the university tuition fees, reduction in the money invested by the government in education, and it also pushes for the partial privatization of the current public university, as well as cutting the resources for arts education.

For months the Spanish university students have been at the forefront of the protests against the austerity measures; and they are willing to take their actions further as they claim that this situation is not sustainable. They have even locked themselves inside of their faculties to call for attention and convince the government to change its policies.

As showed by the official blog of the Castilla y Leon Students Delegates Board; students and teachers of the leading School of Dramatic Art in the region locked themselves inside of their school for longer than a month, from the 25th of April 2013 until almost the end of May, to protest against the inflexibility of the cuts and the new education reform called LOMCE. In their manifesto of intent for the lock-in they point to the scorn and discrimination of artistic education by the politicians and authorities. In the case of their school they claim this has been manifet in the increased tuition fees, teacher layoffs, deteriorating quality and information, and the denial of granting art titles as regular university degrees. In the rest of Europe drama studies are part of the European Higher Education Area (EHEA), while in Spain this degree is considered Level 2, downgrading it to a subcategory below the university degree status.

After their protests at the beginning of the last academic year, the Dramatic Art students have returned to find further teacher layoffs have taken place during the summer. This is compounding the numerous problems that have not been solved from the last year, such as the lack of a school board and a system of quality control. Whilst the number of students per group it is claimed exceeds the limits.

But art students are not alone in their demands about the educational system; during the general education strike on the 23rd and 24th of October, several university groups locked themselves in the largest universities of Madrid; UCM, UAM and URJC; to protest against the new education law, the brutal rising of the tuition fees and what they consider a gentrification of the university studies. Different blogs and online platforms have covered and encouraged these student movements such as #tomalafacultad or the encierro en el rectorado de la UAM websites. The students of all different universities have a common intention, make visible the gentrification and precarious situation of the public university system in Spain.

Edited and Translated by Aida Peláez